Surely most backend developers were dealing with the NoSQL Redis. I think many of them were wondering how to set up Redis so that it would fit under high loads, so that you could open hundreds of thousands of sockets for working with data. This is a really highload, so let's explore the best practices for setting up systems together.

Since the theme of setting for high loads is quite extensive and involves many aspects of the system's infrastructure, I will try to reduce the size of the material, showing only real settings with examples and descriptions to them, for which this setting is required.

The following text and examples of commands are provided for informational purposes and that you understand the main directions for setting up the Redis server and operating system. Their implementation on production servers lies entirely on your responsibility. I recommend that you study each setting individually. Do not copy examples of commands thoughtlessly right into the terminal before you understand their effect and possible consequences.

In order to provide the best performance and reduce overhead hardware costs for working with data we need to make some adjustments to the operating system. These settings are highly recommended. I would like to draw your attention to the fact that all the recommendations and examples of commands apply only to the UNIX family of operating systems. The commands may differ in different OS, however, in each of them, it is possible to configure the following characteristics.

Under high performance conditions we noticed the occasional blip in performance due to memory allocation. To avoid problems with the operation of Redis (point 3 of the manual), you should disable the Transparent HugePages kernel function. Execute in the terminal:

Add the following lines to the /etc/rc.local file so that after the server reboot this function has been disabled:

After this command, you need to restart the server:

Find the following line in the configuration body and set the same value as indicated below:

Redis is mostly single threaded application. To ensure that redis is not running on the same CPU as those handling any network traffic, it is highly recommended that RPS is enabled. The following setting will allow you to distribute the Redis server to all processor cores on your server. The value of the number of cores you must independently change to the amount that is on your physical server. The rps_cpus files use comma-delimited CPU bitmaps. Therefore, to allow a CPU to handle interrupts for the receive queue on an interface, set the value of their positions in the bitmap to 1. For example, to handle interrupts with CPUs 0, 1, 2, and 3, set the value of rps_cpus to 00001111 (1+2+4+8), or f (the hexadecimal value for 15).
To enable RPS on CPUs 0-1 (need root privileges):

To set the CPU affinity for redis to CPUs 2-8:

If you have a dual-core processor, the values are as follows:

Above is an example of the performance boost from a stock compile on a temporary host:

Attention! If you set a sufficiently large value for the available file descriptors, then you must have the hardware capability to work with so many files. HDD with low speed can become a bottleneck in your system. It is highly recommended to use SSD disks.

Comparative timetable for unixsocket and TCP: 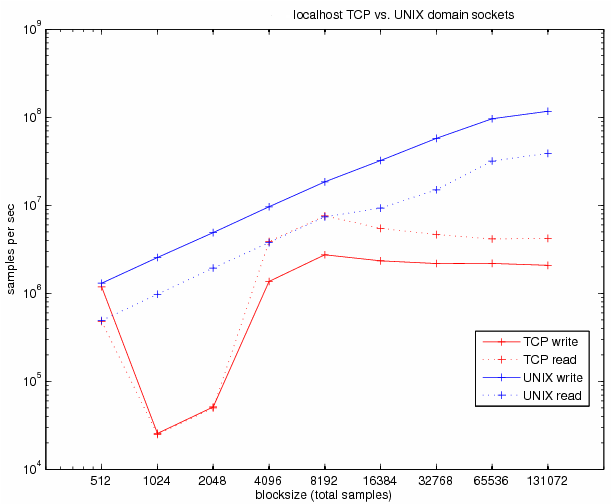 From the above it follows that you need to disable TCP for Redis in the config redis.conf

Set the following values in the redis.conf configuration

Redis will attempt to persist the data to disk. While redis forks for this process, it still slows everything down. Comment out the lines that start with save in redis.conf:

The default is 10000 and if you have many connections you may need to go higher.

By default redis is set to suck up all available memory on the box. Better to set this to 75-80% of the system memory using a facter fact. When running several instances of redis on a single machine this should be tuned down. This setting can be changed on a running process.

Try to work with data in small portions, since this will significantly increase the speed of processing requests. Take a look at the graph to understand the dependence of the amount of data on time: 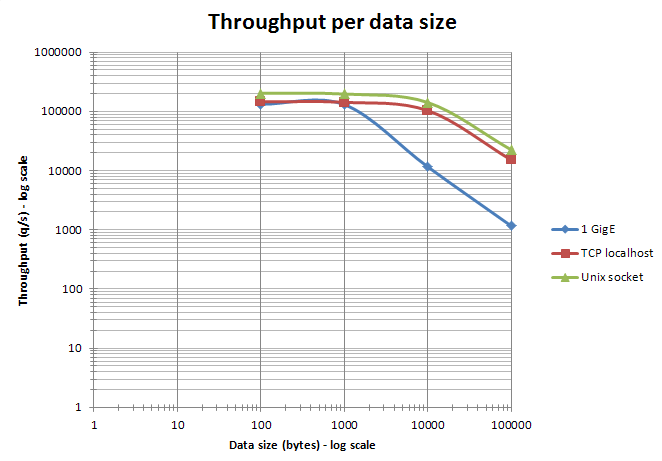 It can be seen from the graph that the packet size is not more than 1000 bytes is the most preferable. Thus, the data can be transferred within the same package, which creates the best bandwidth for the hardware of your server. The larger the packet size, the longer the delay, and this is the transmission of data in several packets to the client and the speed limit of the network interface.

Verifying the results of the configuration

In order to check for real improvements, or vice versa, you can make test measurements using the built-in utility redis-benchmark

It is recommended to change the parameters -c 100 -n 100000 -d 256 and monitor the test results in order to make timely conclusions about the current state of your system settings. On multi CPU sockets servers, Redis performance becomes dependant on the NUMA configuration and process location. The most visible effect is that redis-benchmark results seem non deterministic because client and server processes are distributed randomly on the cores.

Redis is extremely useful in many types of environments, but can be a little daunting at first. By following the best practices, it can perform as a rock solid caching layer to speed up your application.