The strong growth of the smartphone market in recent years has led to the share of mobile phone website traffic to 52.2% in the year 2018. 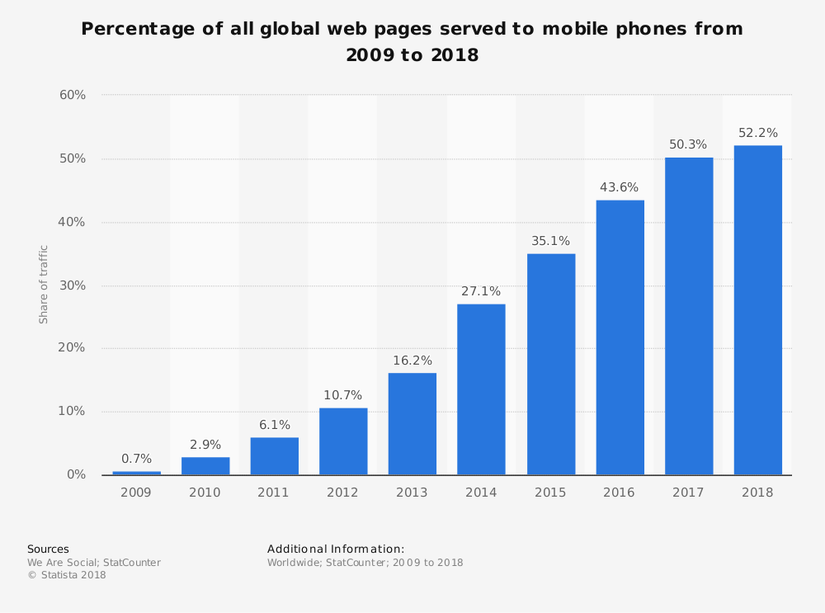 Before we look into the Native & Hybrid App development platforms, there is one most important aspect of mobile app development that needs to be considered i.e., your customer.

Your customer is least concerned about the technology or the platform that power the app they are using.

Most users are concerned about what they can do with the app rather than what goes into making them. So User Experience and User Interface is the most important aspect of any mobile app.

79% of consumers try any app either once or twice if it failed to work in the first attempt while only 16% of the users would give it more than two attempts.

A native mobile app is an application created for use in a single particular platform or device, like Android, iOS, BlackBerry or Windows.

A hybrid app is created as a single app for use on multiple platforms like Android, iPhone, and Windows.

It is a single product that works on many operating systems like iOS, Android, Windows etc.

They look and feel like a native application but are actually run by company website. Created with HTML5, CSS, and JavaScript, It is basically a web-based program put in a native app shell and connected to the device hardware.

In native mobile app development, we have to do coding for different platforms using different programming language specific to each operating system.

So, we have different versions of a single application specially made for each platform. Being specific to that operating system, it runs smoothly over it.

Considering the application has been optimized for iOS or Android OS, it will achieve higher marks in speed and performance tests.

While developing native apps, everything is considered including utilization of the memory and the battery.

It is also very easy in native app development to implement gestures support for the app and integrate new functions.

It is very important for mobile apps to make that good impression in order to not get deleted immediately after installing them.

In native apps, the feel and experience are much better with better scrolling, specific gesture recognition, profound effects and animations, much more appealing elements and so on.

In order to protect your data, full efficiency of hardware resources are required and that is only possible in native app development.

Native apps offer fast access to inbuilt device utilities like the camera, GPS, calendar, microphone, and other functions of the smartphone.

However, hybrid app development has certain limitations while constructing the interface because one single app will be used on multiple platforms.

In native apps, without any restrictions, everything can be implemented that the technology has to offer.

With so many Android devices available in the market with different screen sizes, only native app development is the way of adjusting the layout on each of them.

Creating and implementing the design for every device dimensions like numerous varieties of Android, iPhones, tablets etc takes longer to complete the app.

Developers usually have specialization in a single platform, be it iOS, Android or any other. In building a native app, you will need as many development teams as the platforms you want the app to be created on.

If you are budget-centric, app development occurs only once for all the platforms (Android, iOS, Windows) and you don’t need to hire different programmers.

As we already know hybrid apps are web apps incorporated in a native shell, so its content can be updated as many times as you need or want. So, hybrid apps have a low maintenance.

How quickly do you want your app to go live? As there is a high competition in the market and the same idea being pitched by more than one entrepreneur, you want to introduce your app to the target audience as quickly as possible. If that’s the case, then you should go for Hybrid App.

Hybrid apps add an extra layer between the source code and the target mobile platform, more particularly the hybrid mobile framework. It can result in loss of performance but it varies from application to application.

According to the statement by Mark Zuckerberg (Founder of Facebook) – “The biggest mistake we’ve made as a company is betting on HTML5 over native.” Facebook migrated their mobile app from HTML5 to native clearly indicates a significant difference as far as enterprise applications are concerned.

The extra layer from hybrid development framework also makes debugging a bigger affair. Developers have to rely on the framework itself to play nicely with the targeted operating system without introducing any new bugs in the app.

As compared to native app development, it is difficult to maintain a proper user experience between the Android and iOS app. If you focus more on iOS, the user experience would worsen for Android users.

There are many different directions you can take your app. However to make the right choice, it is necessary to understand the differences between them and their pros and cons as each option has their own strengths and weaknesses, and the final decision must depend on your business needs.

The discussion is still relevant because, for both of the approaches, there are distinct advantages and disadvantages.

Complete Article available on this link