Broadening the View of “Testing”

It can be argued that the review of OO analysis and design models is especially useful because the same semantic constructs (e.g., classes, attributes, operations, messages) appear at the analysis, design, and code level. Therefore, a problem in the definition of class attributes that is uncovered during analysis will circumvent side effects that might occur if the problem were not discovered until design or code (or even the next iteration of analysis). 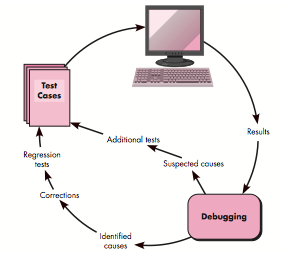 In many cases, the noncorresponding data are a symptom of an underlying cause as yet hidden. The debugging process attempts to match symptom with cause, thereby leading to error correction.