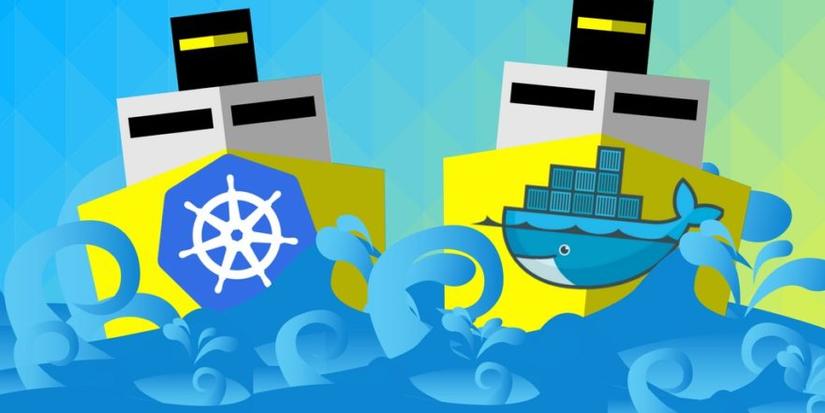 Kubernetes is becoming more and more popular. Strong community behind Kubernetes, which is the driving force behind it, when combined with the convenience and flexibility that Kubernetes provides, together becomes something that deserves admiration. In the last article on this series, we discussed on the Kubernetes basics, including concepts like pod, deployment, service and port forwarding. Well, the discussed topics alone covers a large ground, sufficient enough to deploy a mid-scale application.

Armed with the knowledge we gained so far, let's consider a scenario where we have a limited resource available, let's say a single cluster and a single load balancer (since deploying multiple load balancer is pretty expensive

). But, our application requires at least two deployment environment (e.g. staging and production). Well, a single load balancer with a single external IP can only be map against one HTTP (port 80) and one HTTPS (port 443) port. But, we need two different sets of port mapping (2 app environment * 2 ports). And, this will result in a port collision. How to get around this issue? Let's get to it! Ingress is the key Kubernetes component that enables us to achieve our objective of virtual hosting on a single cluster. Let's get to know it first.

It is identical to Kubernetes service component, that manages external access to the services in a cluster. Before knowing ingress, let's highlight on service a bit.

A service is a way to expose an application (pod, set of pods or deployment) as a network service (inside or outside of the cluster). Service can provide load balancing whenever needed. It supports exposing an application through the means of IP and port mapping (supporting both TCP and UDP protocol), allowing an application to be exposed throughout the cluster (aka. type ClusterIP), throughout the nodes (aka. type NodePort), externally through a load balancer (aka. type LoadBalancer) or externally through an external IP (aka. type ExternalName). A point to note here is that the ExternalName service does not set up any proxy, so no load balancing is performed.

On the other hand, ingress exposes an application as a network service externally through a load balancer (identical to LoadBalancer service type). The exception being, ingress only supports TCP with port 80 (HTTP) and 443 (HTTPS). At this point, you might be wondering, since LoadBalancer service and ingress are both apparently performing the same task, what's the speciality of ingress? Let's check it out!

Kubernetes ingress components are meant to be used for web services only, where the usage scenario of a service can be considered generic.

The following features are exclusive to ingress only.

In this article, we're gonna use the Nginx ingress controller. Let's install the controller first.

Multi-domain Hosting on a Cluster

If we use a LoadBalancer service to expose an application in a cluster, it will provide only the load balancing feature. And, all the traffic will be routed to the mapped application in the cluster. While this configuration is sufficient for an application that requires only a single domain configuration, it is impossible to perform name based virtual hosting like the scenario in the diagram as follows.

This is where ingress comes to play. Ingress supports scenario like this where an incoming request needs to be routed to a specific backend, based on the Host header.

Here's a basic configuration of an ingress component that facilitates name based virtual hosting.

Let's investigate! The configuration itself is a YAML like any other Kubernetes component. When NGINX ingress is installed, it automatically discovers and processes all the ingress components with kubernetes.io/ingress.class: "nginx" annotation. Since our ingress is intended to be processed by NGINX ingress, the specified annotation at ingress.metadata.annotations ensures it.

Our ingress specifies a list of rules at ingress.spec.rules. For our configuration, each rule specifies a host which is matched against the Host header of all incoming requests. If no match is found, the default backend handles the request.

Each ingress.spec.rules[].http.paths[] specify one or more path, against each of which a backend is configured. Each leaf level path (e.g. /cat/jerry) gains precedence over the root level path (e.g. /cat). This implies that, if we have a configuration as follows, /nested will route to servicex.

Once the configuration is ready, we can create a new ingress using, kubectl apply -f <INGRESS_CONFIGURATION_FILE>. An ingress status can be checked using kubectl describe ingress <INGRESS_NAME>

The above configuration works only for HTTP traffic. HTTPS / TLS configuration requires some extra step and is a bit tricky. There are two different ways to configure an ingress for HTTPS traffic. 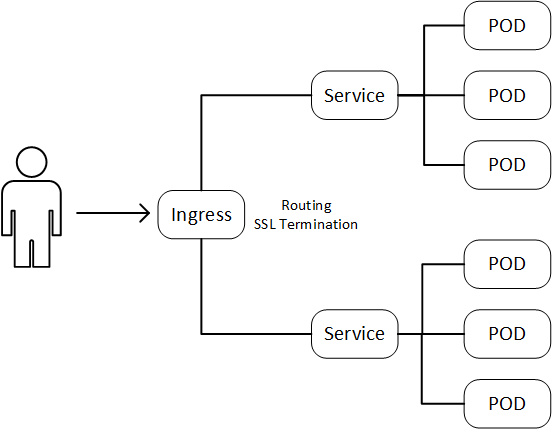 Before proceeding, we need to install cert-manager.

TLS termination through ingress and cert-manager requires configuration of the following components.

Let's go through the basic configuration of each of the components.

In Kubernetes every component is namespaced. Depending on the namespace resolution, any of the following issuers can be defined.

The above YAML defines a ClusterIssuer that can be accessed from any namespace in a cluster. clusterissuer.spec.selfsigned enables a self signing CA.

Now, we can deploy the issuer using, kubectl apply -f <ISSUER_CONFIGURATION_FILE>. And, the issuer status can received from kubectl describe clusterissuers.certmanager.k8s.io <ISSUER_NAME>.

Once the certificate is issued, it will be scheduled to be renewed automatically.

Configuring Ingress as a TLS Terminator

At this point, we have have TLS credentials that is automatically managed. Now we can utilize the credential from an ingress as follows.

Once this component is deployed, the following will happen.

And, now we have successfully set up an ingress for HTTPS termination.

Ingress can also be configured to pass-through HTTPS traffic directly to backend, instead of terminating it. This is achieved by leveraging TLS SNI. But, due to performance issue, this approach is not recommended. Check out the documentation for more details.

So far, we went through different configurations of an ingress in order to enable name-based virtual hosting on a single cluster, and different TLS configurations for HTTPS traffic. Demonstrated configurations have a large number of use cases and advantages, which significantly includes, resource and cost optimization in small and mid-scale projects. In an upcoming article, we'll go through on-premise Kubernetes deployment!

Till then, happy deploying!