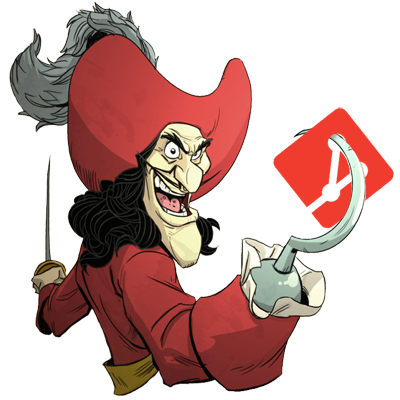 Git hooks are event callbacks that fire when an important event occurs (e.g. a commit is made, a rebase is about to take place, etc.). Hooks can be classified into,

Hooks are powerful as they provide access to the critical transition points of a git operation flow. Many repetitive tasks can be automated by utilizing hooks. To name such,

Client hooks are usually stored in the .git/hooks sub-directory, in a repository. Initially, the following hook templates are provided with each repository.

Any script (e.g. bash, ruby, python, ...) will work as git hook, as long as the formatting is correct, and execution runtime is available.

Each hook name must represent the associated hook type. For an example, if we want to deploy a pre-push hook, we need to put the script exactly in the following file.

And, the hook file must be executable.

In order to install a dummy pre-commit hook, we can do the followings.

Using hooks, it is possible to entirely skip writing the commit message during each commit.

Consider the following Ruby implementation of the prepare-commit-msg hook that prepares the default git commit message for us.

The above hook prepare a default commit message, that can be edited as necessary, or we can just skip writing the commit message altogether!

This way, in order to commit, we just need to invoke the followings,

Consider a project where documentation is written in Markdown, and the project script can automatically build HTML equivalent for the documentation (e.g. Docusaurus). Developer may want to track markdown and synchronized HTML, both.

The non-hook solution will be to run the build script manually, every time there is a change in the documentation.

But, if we use git client hook, we may skip the entire flow, since hook will take care of the file change checking and building, automatically.

An example bash script implementation of the above mentioned hook may look as follows.

Let's go through the code a bit.

The bash script above collects references of relevant project directories.

Then, it checks for any documentation (markdown) change in the target_dir_patt.

Then, if changes are found, it rebuilds the documentation. And, on a successful build, it stores the build files in doc_build_dir.

And, finally, the generated changes are staged for commit.

We return the exit code 0 immediately before EOF to indicate a successful execution.

Our hook will effectively track the changes and build without developer's intervention, which effectively increases the productivity.

This hook runs before a commit, before commit message is provided

Exiting non-zero from this hook aborts the commit

Runs before commit message editor is fired up, but after the default message is created

Runs after the entire commit process is completed

Last commit can be retrieved by running git log -1 HEAD

Runs before anything is rebased

Warning: This hook is not run by git filter-branch

Runs after a successful git checkout

Runs after a successful merge

WARNING: Updating commit (e.g. amend) will not be effective, cause, only the original commit gets submitted, regardless of any change in the hook

Runs during git push, after the remote refs have been updated, but before any objects have been transferred.

One of the advantage of Git client hook includes it's flexibility. For an example, when hooks are installed, you may need to skip the callback during a certain git operation. You may simply achieve this by using the --no-verify flag with the git command. This will bypass all the associated hooks.

Hooks can be integrated as a part of the development workflow to accelerate the development process. It is advantageous to use since it provides the flexibility of developing script in virtually any language with the expected runtime support. Give it a try, and, happy hacking!