We are living in a world where computers and electronic devices play a pivotal part of our life. No one can alter the fact that wherever we go, whatever we do in this modern life, it is not hard to witness the appearance of them. Tiny handheld devices, sparkling traffic lights, even remotes we use regularly, etc. nowadays are the achievements of continuously developing information technology in many years. Back to twentieth century, one of the most remarkable technology events had been taken place, when the whole world was recovering from the wounds of the second World War, the first general-purpose computer became public with the name ENIAC (Electronic Numerical Intergrator and Computer). Although it was developed under wartime pressure, it has been of value not only in producing results but in pointing the way toward improvements for future designs (Brainerd and Sharpless, 1948) because general-purpose computers have the amazing property that a single piece of hardware can do any computation imaginable (Grant, Palmer and Smith, 2017). Before general-purpose computers were born, there had been special-purpose computers for arithmetic calculations, which had to be manually reconfigured to carry out different calculations such as Abacus – The earliest known device for calculation (Gujarat Education Department, n.d.).

In fact, to make computers and electronic devices as successful as today, the development of programming languages is the most important precondition. This part is going to be described briefly about several milestones during the great history of general-purpose programming languages and about a brief introduction of domain-specific languages. 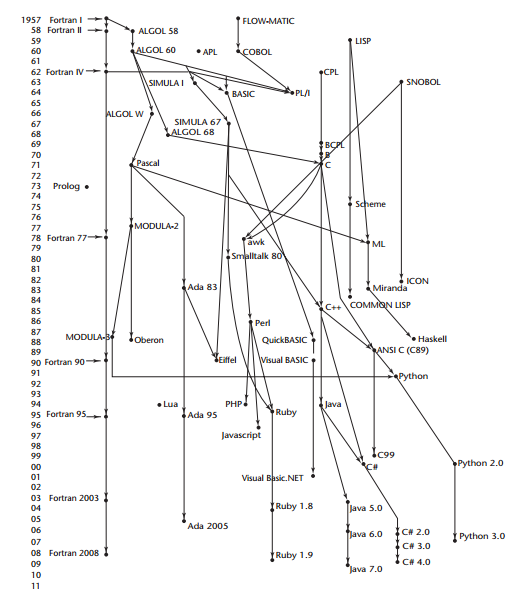 For general-purpose programming development, it predates the development of computers. In the early 20th century, logicians created their own programming languages originally springing from the concept of a proof system (Grant, Palmer and Smith, 2017). To illustrate this spirit, λ-calculus – an officially abstract language of functions in 1932 designed and implemented by Frege, Church and Curry was born. The λ-calculus provides a simple semantics for computations. One of the clearest example for this point of view is treating every function “anonymously”.

After λ-calculus released, there is no reliable material pointing out the first general-purpose programming language, yet the most worth-noting programming language at that time was FORTRAN in 1956 because it was the first programming language equipped with a complete compiler (Backus 1956). Before FORTRAN, almost all programs were done in machine language or assembly language (Wexelblat, 2014). At that time, programmers considered their works as a complicated and creative art that required human inventiveness to produce an efficient program, therefore, FORTRAN was born to solve these problems with the support of index registers, built-in floating point operations, a wide range of instruction sets and primitive input – output arrangements. Since 1956, FORTRAN was developed with lots of variants, namely: FORTRAN II (1958), FORTRAN III (1958), FORTRAN IV (1962), FORTRAN 66 (1966), FORTRAN 77 (1977), Fortran 90 (1991, since this version, FORTRAN was renamed to be in lower-case form), Fortran 95 (1995), Fortran 2003 (2003), Fortran 2008 (2008). However, 2008 was not the last destination for the development of Fortran. According to Intel, Fortran 2015 will be released on July 2018 with up-to-date features, most of them extends the C interoperability features that first appeared in Fortran 2003. Several following years after the release of Fortran, in 1958, a miraculous product that was inspired and influenced by this programming language had been public – ALGOL 58 (Wexelblat, 2014). Basically, ALGOL 58 was developed by a father of Fortran – John Backus with the specific Backus normal form method of describing programming languages. Later, it was revised and expanded by Peter Naur for ALGOL 60, and at Donald Knuth's suggestion renamed Backus–Naur form (Knuth, 1964). Since ALGOL 60’s release, many other general-purpose programming languages were published and followed its spirit and paradigm such as Pascal, C (although C differs from most of ALGOL-like languages in some significant ways), etc. (Mitchell, 2003).

As the code snippet illustrated, the most distinctive feature that differed ALGOL60 and Fortran was block-oriented control structures (i.e.: procedure, comment, begin, end) and variable scoping.