In computer science, use of string and handling them for different purpose is very inportant thing. There are some data structure for work with string in programming language. TRIE is one of them. Today we will discuss about it.

Suppose we have a dictionary with the following words.

Now we need to find a way to save them in such a manner that we can retrieve them easily. One of the way is to save them in sorted order. So after that binary search will do rest. and another way is using trie.

Now we will build the Trie for the above example. At first there is no other in our structure except root. Now we will add algo. We will add a edge from root node and give the edge name 'a'. From the newly created node, we add an 'l' edge to new node. After adding 'g' and 'o' edge the trie will look like this - 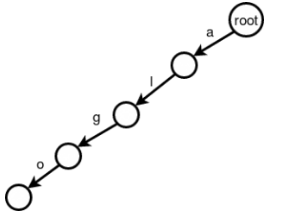 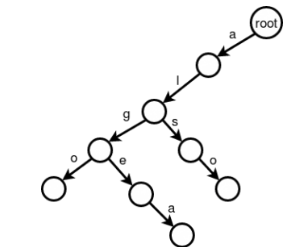 next we will add Tom in the try. As there is no 't' edge so we need to do it from scratch. Now To is a complete prefix of Tom so we dont need to add anything. we only need to color the last node of each word as gray to understand the last of each word. So our final trie get the following structure - 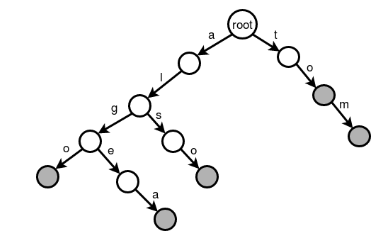 So now what is the importance of storing words like this. Because it is easy to find any word from this structure. Suppose if you want to find "anh" in this structure. First you need to check for 'a' edge from root. Yes, we have this in trie. Next we need to find 'n' edge from the current node. But we dont have this. So "anh is not in our dictionary. Generally we need to do number of letter operations to find a word in Trie.

The ruby implementation is given below -

Searching complexity of trie is O(length of search word). Inserting complexity is also the same. Memory required for storing is dependent on number of word and how much prefix is common.

Hope this helps. Thank you