Undoubtedly, JavaScript’s (JS) popularity in the developer community has grown exponentially over the years. The reason is its ability to allow developers to design and modify web pages in numerous ways and even add functionalities to real-time web apps. JavaScript is gathering attention not just for its simplicity and ease of use but also due to what it brings to the table—Efficiency, Security, and Low-cost results.

At the same time, advancing technologies are pushing techies to add new skills to their repository for JS. It goes without saying that the market of JavaScript libraries/frameworks is a bit messy today. There is a lot of noise with in terms of available options and developers often need to test the waters by learning multiple libraries/frameworks to determine the best one.

Consider the popular State of JS Survey of 2018 that gives an account of the number of libraries that developers are currently using: 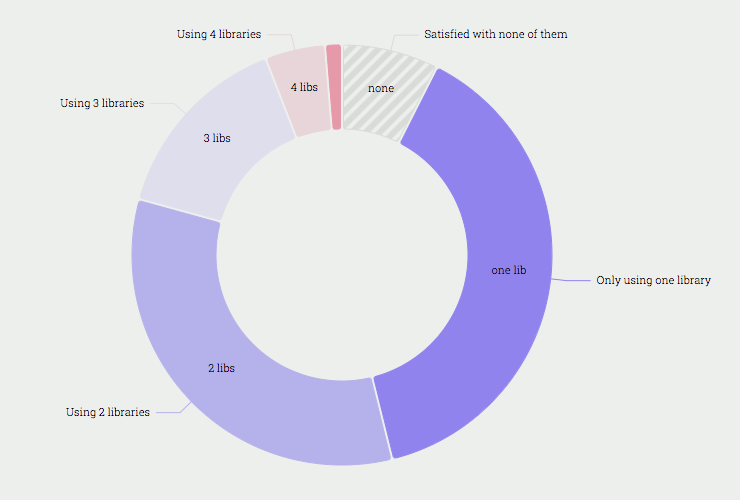 Although there are many libraries available today, survey results prove that Vue, React, and Angular continue to be the market leaders. 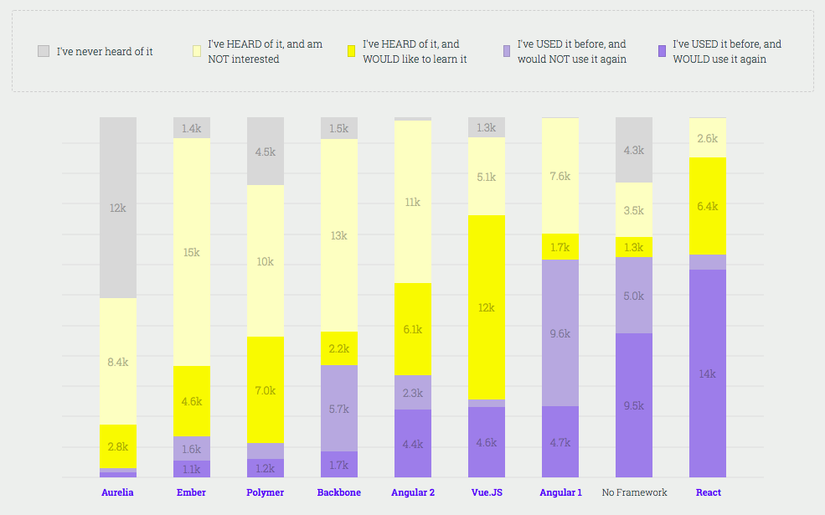 Here we have listed top 3 best JavaScript frameworks that you must keep an eye on, in 2018:

Vue became the most popular front-end GitHub project in 2018, a feat that has followed the framework in 2018 with 117k stars and more than 29k forks (at the time of writing). Created by Evan You who worked on numerous Angular.js projects during his time at Google, Vue.js is a lightweight counterpart of Angular.js and is also proving to be an attractive alternative to it.

One of the main reasons why developers love Vue is because it is a progressive framework. This means that it elegantly adapts to the needs of the developer, starting from 3 lines to managing your entire view layer. VueJS can be quickly integrated within an app through the ‘script’ tag, where it gradually starts to explore the space.

But Vue particularly works because it picks up the best choices and possibilities that frameworks such as Angularjs, Reactjs, and Knockout provide. This makes it the best version of all frameworks put together in a neat and tidy package that delivers.

Let ‘take a look at the pros and cons of developing with Vue.js

React is another popular JavaScript library which powers Facebook. Developed and open sourced by Facebook in 2013, it quickly rose to prominence for the development of huge web applications that involve dynamic handling of data.

In Jan 2019, Facebook extended its support to the library by moving the create-react-app (CLI tool to help create React app) from incubation to the official Facebook repository.

One of the main cases where React finds extensive usage is when developers need to break down complex codes and reuse them in an error-free environment that has the capability to handle real-time data. Elements related to lifecycle hooks such as decorators, help to enhance the user experience.

React makes use of virtual DOM that helps it to integrate with any application. It also adopts JSX to structure components and helps to develop more SEO friendly web pages as compared to other JS libraries/frameworks.

To help you pick the best library/framework for your needs, let’s take a look at the pros and cons of React.js Development:

Angular is considered to be one of the most powerful open source frameworks. It is an “all-in-one” solution that aims to provide developers with every possible option out of the box. From Routing to HTTP requests handling and the adoption of TypeScript, everything has been set up.

Although the learning curve of Angular was quite steep in earlier versions, it has smoothened out in the latest version of Angular 5 and 6. This has been made possible through a robust CLI, which has taken away the need to know the low-level details for simple apps.

Developed and maintained by Google, Angular has followed the schedule of releasing new versions every 6 months. The latest releases have mainly focused on the addition of new features and improvement of performance.

Here is a look at the pros and cons of Angular.JS Development:

Here is a consolidated look at the comparison of the 3 most popular JavaScript Frameworks/Libraries of 2019 to give you a bird’s eye view of how things stand: 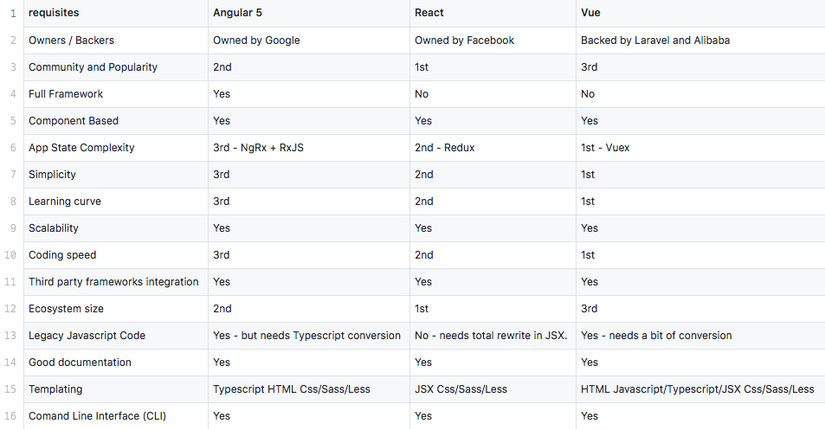 All 3 frameworks/libraries are quite popular today and are backed by a healthy ecosystem and team of developers. There is no right answer and it all comes down to your personal choice and programming style as each framework involves a different development philosophy. Whatever the case, React, Vue, and Angular continue to dominate the world of JavaScript.

Which JavaScript framework/library did you find the best? Share your views with us in the comments!