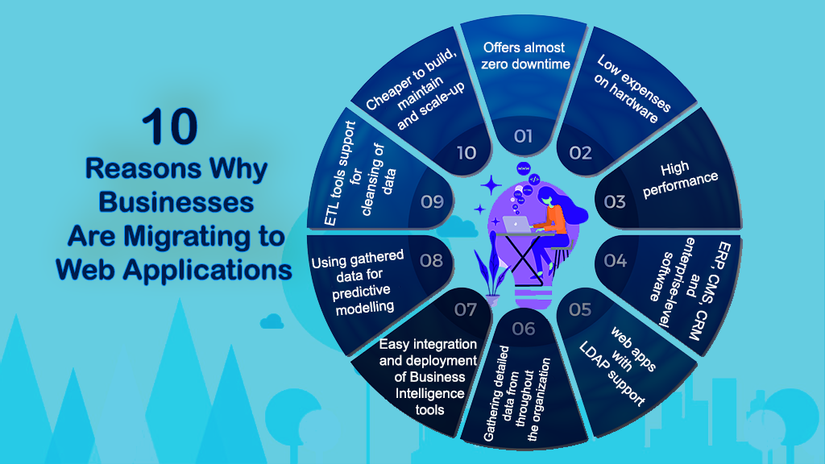 Web applications are out there in the market since the emergence of cloud services. With booming high-speed data communication channels, more players are jumping in to cloud business with AWS as the market leader which roughly supports 40% of the internet today. Low-cost cloud services, cross-compatibility of web apps and data analytics are stagnantly increasing the adoption of web apps.

​​1. Cheaper to build, maintain and scale-up

2. Offers almost zero downtime Now a day’s web applications run on shared hosting services where subscribers have to pay according to their usage, which is maintained by hosting service providers. It is almost impossible that your service provider will run out of hardware resources to support the random surges in a number of users. There’s also AWS S3 service which deploys older version (older war file) of web applications if the newly deployed version fails on servers. All the above-listed facts ensure that end-users experience almost zero downtime.

3. Low expenses on hardware Since web applications run on web servers and UI is rendered on a web browser on the user’s end, therefore, the end-user doesn’t require an expensive device to the web application. He/she just need a device that could smoothly support a powerful device hence web applications can reach out to a larger customer base.

4. High performance As we know web applications run on servers but what we don’t realize is those are not low-end hardware devices that would narrow down the horizons of performance. Usually, these web servers save web applications on SSDs and run the application with high power CPUs and GPUs. The graphical oriented processing is done by GPUs, even detailed searching like elastic search is provided as a service by AWS. All you can conclude is native applications cannot beat web applications in computing-intensive tasks.