I. What is Middleware? why so important?

When we are working on a real application, when we often require processing operations that need time to respond (asynchronous operations to get data from the api or operations to read and write files ...) . This operations, we call it as side effects in functional programming. Anyway in redux, we have some constraints:

So if we need be able to deal with side effects, we need to do it in the middeware. 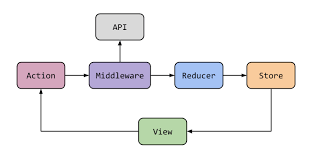 In Redux, middleware is the layer between Reducers and Dispatch Actions, it will be called before the action is dispatched. Currently we have some options for middleware libraries for redux. But the most famous and normally used are redux-saga, redux-thunk and redux-observable.

The 3 libraries above, they can solve most of the cases that we face in Redux. Although redux thunk is quite easy to understand and coding, it is not very good in some situations, this is overcome with more powerful libraries like redux saga and redux observale.

The Redux saga provides effect helper functions, which return an effect object that contains special information that instructs the Redux middeware to perform other actions. The helper effect functions will be executed in the generator functions.

Some helpers in the redux saga:

For understanding more, we will create a small app how to implement redux saga in Project. We will do a function to take all Book from server. To execute a Saga, we first need to create an action. In the bookSlice.js file, we add the following code:

We create a function to get the book data from the api and put it in the file BookAPI.js

You create a new file saga.js and add the following code to be able to add an asynchronous action when the fetchData action executes:

Run the application and we will get a list of books that we can push to view.