Recently, I supported a friend to setup network for his VMs based on a dedicated server which was bought from OVH. At first, I never thought that I had to spent more than 3 days to complete it because I'm not a nerd guy in computer network and system. Howevers, I was struggled with virtual machines and its network in several weeks due to poor documentation and terrible supporting from OVH. So, I decide to write this post to share my own experiences for everyone who're going to use cloud services of OVH.

Firstly, let check the ingredients that OVH gave me after shopping:

Different to VPS, dedicated servers can provide more powers and resources, from CPU, memory to networks. However, they also accompany with complicated configuration and management. Bascially, normal Oparating System such as Window server and Linux couldn't maximize their performnace and we don't have any better choices outside Hypervisor tools (Xen, VMWare Esxi...) In this article, I mentioned only about VMWare Esxi and I hope that I can update for all other tools. 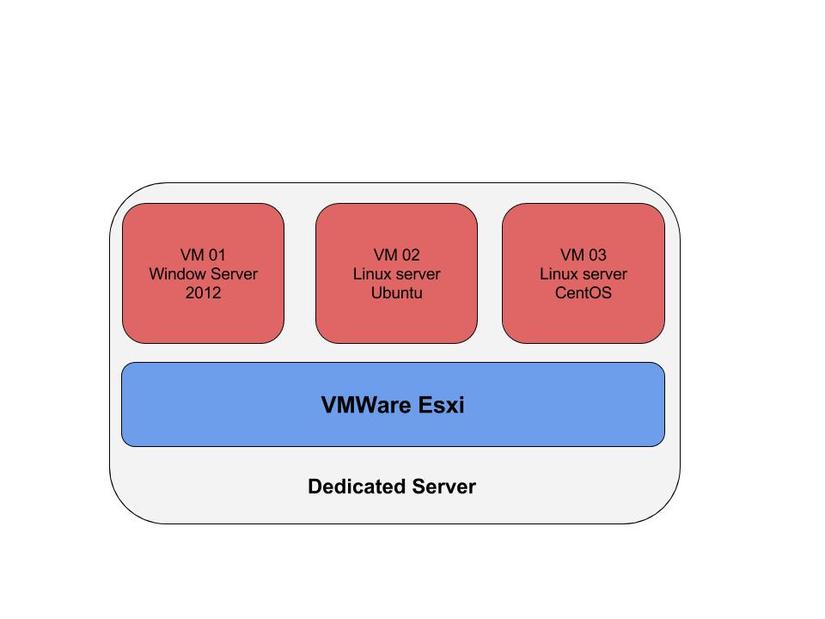 Now, in brief, we wanna to provide full connection for all VMs running over VMWare Esxi. For more detail, I will show it in next part

In this part, I'll show the steps to config network for VMs hosts. Should be noticed that you need to follow step by step if you're not have much experiences with network and system. If your VMs still haven't connection, let take a look on troubleshooting in the end.

VMWare Esxi To install VMWare Esxi on dedicated server, just login to control pane provided by OVH through this link and just in few clicks, VMWare Esxi will be ready.

After that, let open your browser then go to your dedicated server IP address to download vSphere Client and from now, we will interact with server throught it. Notice that, vSphere now works only with Windows system so if you are using Linux or OSX, let turn to Window by virutal machine. When accessing your server on vSphere, it'll show like this You can easily see that IP address(12.34.56.78) given by OVH representing for Management network and we won't tough on it. Our scope is just aroung Failover IP list (123.45.67.64/27) with each one of them is public IP address for Virutal Machine

All of geek guys known that we need four parts to complete network configuration on host: (i)Network address, (ii) Subnet mask, (iii) Default gateway, (iv) Domain Name server (DNS). And default gateway address must be in same network with host address and subnet mask have to show suitable wildcard. However, OVH has broken it

The default gateway is composed of the main IP of dedicated server ending in .254

After locating Failover IP and its default GW, we need to register it on control panel OVH to receive virutal MAC address.

There are two options to set a MAC address for virtual machine:

I strongly recommend to set MAC address on virtual machine settings because the gap between OS can create more difficulties for you. If your virutal MAC dosen't match, its connection will be refused.

For window server, it's much more simple with visualization GUI. For someone who never use window before (I think no one

If you strictly did the configuration from above steps, I thinks it will be no problems. Howevers, Murphy said "Anything that can possibly go wrong, does" so, it's better if you know how to overcome problems when pinging unsuccessfully.

Sometimes, get a break from programming with Infra excercise make me fell like climbing over an mountain. I hope that my post will be helpful for someone start to use service of OVH. Please contact me if something going wrong