Today, I bring you Redux, a library that's popularly paired with React and is used for managing application state. Let's go over core Redux principles/patterns and work on a small example application together.

We might have heard about React components a lot of time. Conceptually, components are like functions which accept inputs (props) and return React elements in charge of describing what should be rendered on the screen. Nothing more. In React, data flows through components, which is specifically called "unidirectional data flow" — data flows in one direction from parent to child. Going on with the flow of such characteristic, it is kind of vague how two non parent-child components will communicate in React.

Of course, you can pass a callback function to the props of child component, then each time the function is called, you save the data into the state of the parent component and pass it as the props of the other component. Like this: 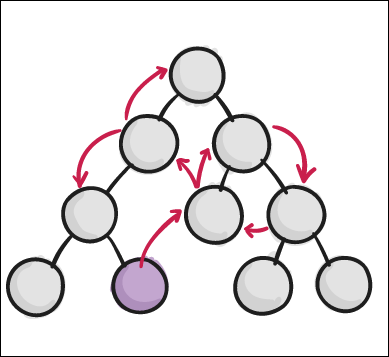 Such feat is not impossible, however, not recommended. Even if React does have features to support this approach, implementing direct component-to-component communication this way is considered poor practice by many developers due to being error prone and possibilities of leading to spaghetti code — an old term for code that is hard to follow.

This is the critical moment when Redux comes in handy.

Redux is a tool for managing both data-state and UI-state in JavaScript applications. It's ideal for Single Page Applications (SPAs) where managing state might becomes complex over time.

In a Redux application, all of your application states is stored in one place, called a store. Component A, which is in charge of initializing changes, dispatch an action which leads to state changes in the store. Meanwhile, component B, which needs to be aware of any state changes can subscribe to the store. 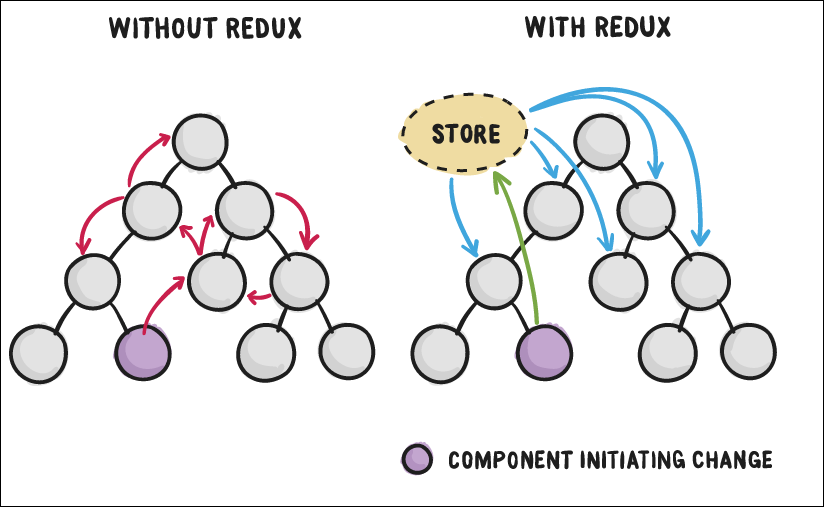 The store can be considered a "middleman" for all state changes in the application. With Redux involved, components don't communicate directly with each other. Rather than that, all state changes must go through the single source of truth, the store.

Where do all components get their state? The store. And where should they send their state changes? Also the store.

The general concept of using store(s) to coordinate application state is a pattern known as the Flux design pattern, which compliments unidirectional data flow architectures like React. While Redux is a tool, Flux is just a pattern, it's not something you can download. It has been proved that Redux is Flux or is Flux-like, depending on the strictness in which one defines the rules of Flux but ultimately, it does not really matter as long as you carve into your memory Redux's 3 guiding principals:

Redux uses only one store for all its application state. Since all state resides in one place, Redux calls this the single source of truth. This one-store approach of Redux is one of the primary differences between it and Flux's multiple store approach.

The only way to mutate the state is to emit an action, an object describing what happened.

The functions that handle actions dispatched and are capable of actually changing the state are called reducers. Reducers are "pure" functions - functions that do nothing but return a value based on their parameters while having no side effects into any other part of the application.

To start, create a store with Redux.createStore() and pass all reducers in as arguments. Let's look at a small example with only one reducer:

So what happened above?

First, The store is created with one reducer named heroes. Reducer heroes establishes that the inital state of the application is an empty array (state = []). After that, an action ADD_HERO is dispatched. The reducers retrieve the parameters (payload: { ... }) and returns a new state, which updates the store.

There are several things that should be noted here:

Inevitably, most application will need more complex state for the entire application. It is merely the matter of time. Sice Redux uses just one store for the whole application, it is necessary to use nested objects in order to organize state into different sections, for examples, like below:

It's still "one store = one object" for the entire application, but it has nested objects for heroState and villainState that can contain all kinds of data. This might seem overly simplistic, but it's actually not that far from resembling a real Redux store.

In order to create a store with nested objects, we'll need to define each section with a reducer:

The use of combineReducers() allows us to describe our store in terms of different logical sections and assign reducers to each section. Now, when each reducer returns initial state, that state will go into it's respective heroState or villainState section of the store. But which Reducer is Called After a Dispatch?

Answer: All of them. Comparing reducers to funnels is even more apparent when we consider that each time an action is dispatched, all reducers will be called and will have an opportunity to update their respective state.

Just to be clear, react, redux, and react-redux are three separate modules on npm. The react-redux module allows us to "connect" React components to Redux in a more convenient way.